The CEV Champions League Volley follows in the footsteps of the former CEV Champions Cup, with the first edition held in the 2000/2001 season, following a full revamping of the European Cup competitions. Ever since its introduction, it has featured all of the top teams in Europe and quickly established itself as the most prestigious club competition in international Volleyball – thus attracting elite players from overseas as well, wishing to play at the highest possible level.

After discontinuing the Final Four format at the end of the 2018 edition, the CEV introduced in 2019 the revolutionary concept of the Super Finals – with the top two teams in each gender coming together to play a winner-takes-all match at the very same venue, with the same share of prize money at stake.

With as many as six triumphs to their name, Zenit KAZAN of Russia hold the record for the most titles won in the men’s competition. They first claimed the trophy in 2008, under their previous denomination of Dinamo-Tattransgaz, in what was only their first appearance in the CEV Champions League. They claimed the crown back in 2012, before sweeping the title four times in a row between 2015 and 2018 [pictured] – in a truly unmatched period of total supremacy, largely accounting for six straight titles claimed by Russian clubs between 2013 and 2018. TRENTINO Volley of Italy and Belogorie BELGOROD of Russia follow next with three titles apiece.

Volley BERGAMO of Italy and VakifBank ISTANBUL of Turkey have been equally dominant in different decades – with their respective spans of international supremacy producing four CEV Champions League titles for each of these two clubs. If Italian teams, together with RC CANNES of France, were the standout performers between 2000 and 2010, Turkish teams claimed as many as six titles in the following decade – with Fenerbahce (2012) and Eczacibasi (2015) adding one crown apiece to the four secured by their compatriots of VakifBank in 2011 [pictured], 2013, 2017 and 2018.

Russian middle blocker Alexander Gutsalyuk has as many as six CL titles on his resume – since he shared five with Zenit KAZAN and spent the 2012/2013 season with Lokomotiv NOVOSIBIRSK, thus helping the team from Siberia claim their only Champions League crown to date. Italian Volleyball icon Francesca Piccinini leads the way on the women’s side with an amazing seven titles – including one from the former CEV Champions Cup. Piccinini, who recently announced her retirement from competitive Volleyball at the age of 42, most recently triumphed at the historic Super Finals held in Berlin in May of 2019, while wearing the shirt of Igor Gorgonzola NOVARA.

All of the top Volleyball players of the past two decades have claimed the prestigious MVP award of the CEV Champions League Finals – thus producing some sort of ‘an elite of the elite’. The below list includes legendary names from the past and present of international Volleyball, with Osmany Juantorena and Victoria Ravva the only ones to have swept this prize as many as three times. 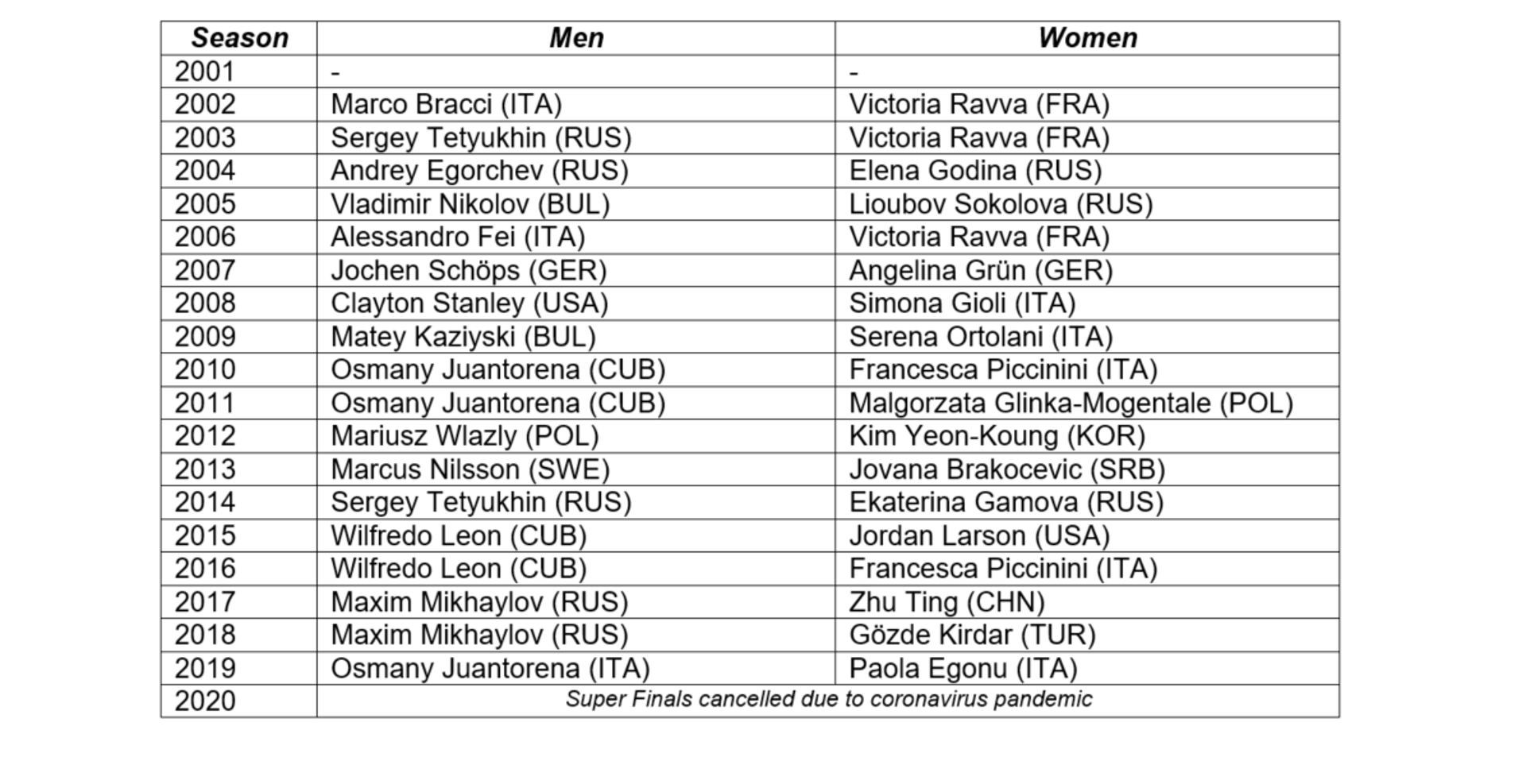