For the first time in history, the ZAKSA volleyball club triumphed with the CEV Champions League Volley title. Officially playing in the 2021 edition under the name Grupa Azoty Kedzierzyn-Kozle, the Polish team mastered a four-set victory over three-time winners Trentino Itas of Italy to celebrate victorious in the men’s Super Final at the AGSM Forum in Verona on Saturday. 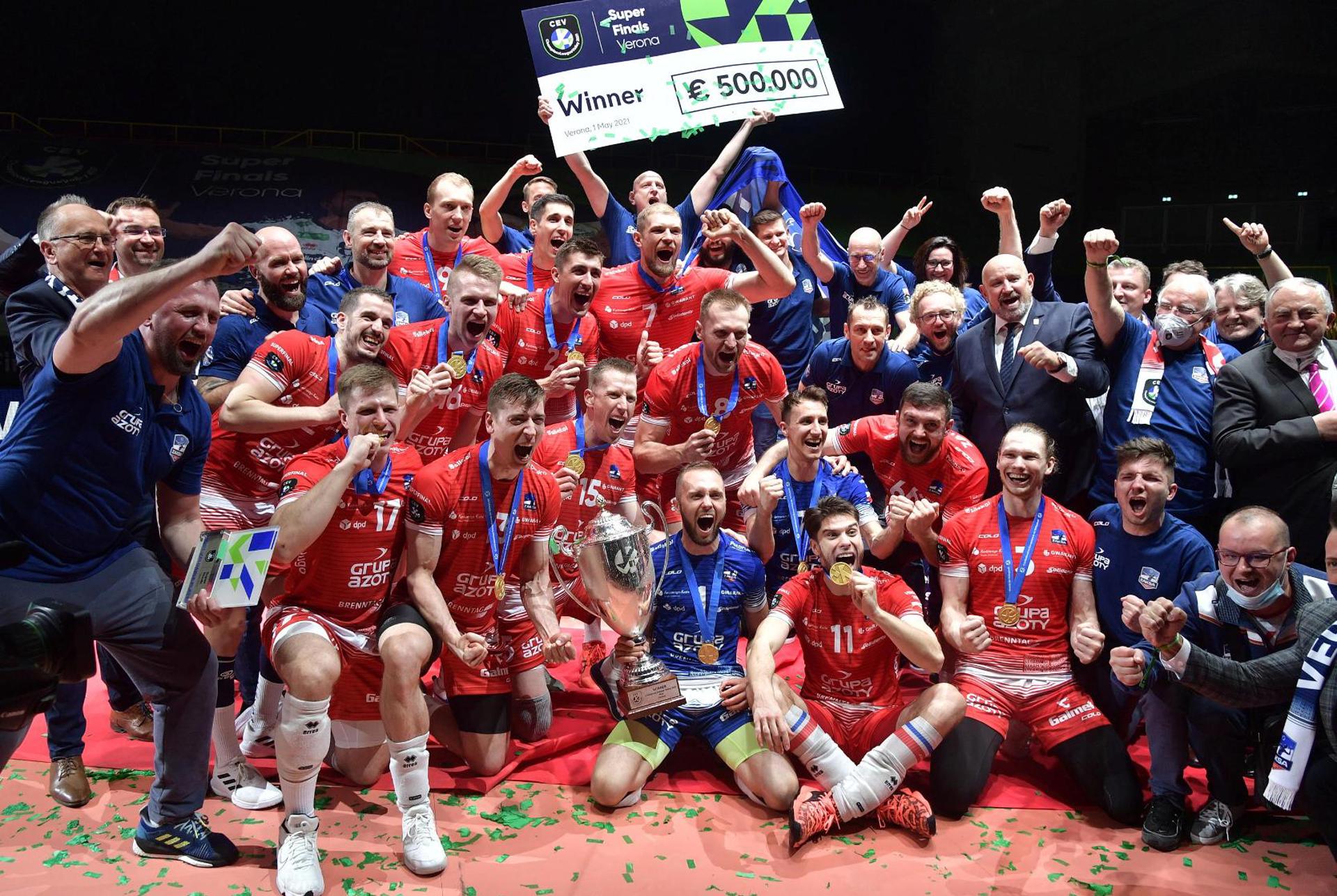 Trentino opened an early 5-2 lead and kept it up for a while. However, Grupa Azoty were more persistent in offence to draw level at 10-10. The middle part of the first set was a tight battle, with the lead going back and forth. After 21-21, the Polish side took control for good, broke away and closed the set at 25-22 with a powerful hit by Lukasz Kaczmarek for the last point.

The Italians started the second set on a 3-0 run, but their opponents quickly got back to level at 5-5. The real momentum changer, however, came after Kamil Semeniuk’s kill tied the score at 13-13. He went to the serving line and followed up with two aces in a row. Aleksander Sliwka added the next two at the net and the score was suddenly 17-13 Grupa Azoty’s way. Trentino fought back, but only to stay close behind. Finally, Sliwka put away the winner for another 25-22.

On two consecutive hits by Nimir Abdel-Aziz, followed by two aces in a row by Ricardo Lucarelli, Trentino took yet another early lead, 4-0 in the third set. And once again, the Polish team fought back to level the score at 9-9. Only this time they never managed to step in front. Nimir showed his blocking skills as well, while Ricardo hammered a few points in offence, including the one that ended the set at 25-21 to keep Trentino in the game.

The fourth set was by far the most competitive one. The score swung from two points in favour of Grupa Azoty to three in favour of Trentino, but for the most part the margin was one point or less. The Polish side managed to regain the lead just when it was time for match point, but the Italians wouldn’t give in so soon. They denied the opponents three opportunities to close the game, but on the fourth one Kaczmarek hammered a blistering ace for 28-26 to get the celebrations started. 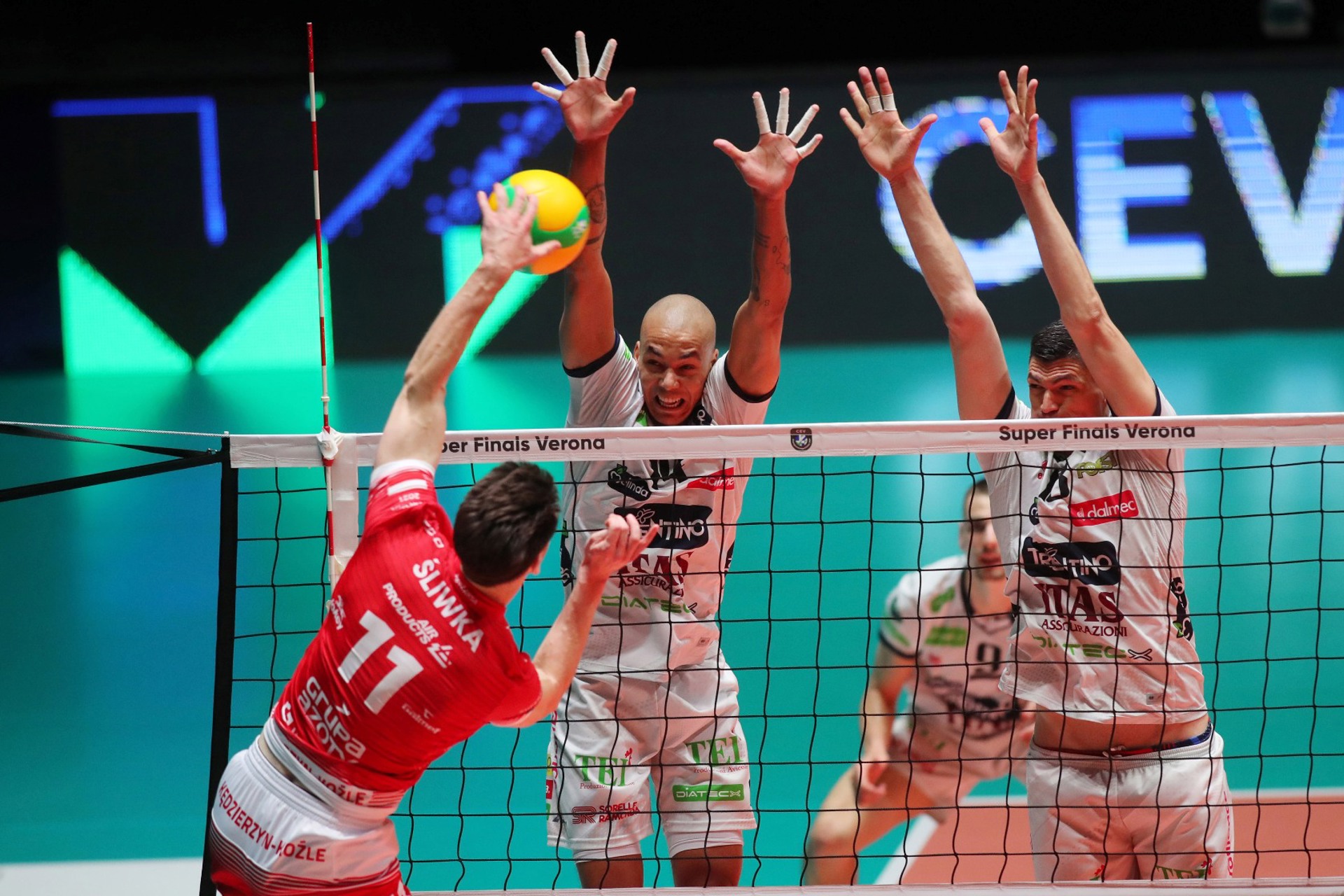 It is only the second continental crown for Poland in history and the first one since the Champions League format was launched at the turn of the century. Previously, the club from Kedzierzyn-Kozle have been on the podium only once, with bronze in 2003.

“I am proud of these guys! Once more, they were the best that they could be when their best was needed. And that happened so many times this season, against many different difficult opponents. We eliminated three of the world’s top teams. We believed until the end we really deserve to be the champions of Europe.”

“We bring the continental trophy to Poland for the first time since 1978, a really long time. It’s amazing! I am in a shock and it’s hard to say anything. We had our ups and downs, but we gave our best. We lost the championship final in Poland, which was tough for us, but we came here knowing that there is only one game and we have to give 100%. It was a tough journey, but we had confidence and it made us better players. We are surely going to celebrate tonight.”

“It’s difficult to speak at this moment, especially to say what we could have done better. We had some opportunities, but we didn’t take the chances that we had. And they did! After working a lot through a long season like this, you want to finish it in a good way and you feel that you deserve it. Of course, they also worked hard and deserve it... It’s difficult right now...”

Nimir Abdel-Aziz
Opposite of Trentino Itas